The Best Email of the Day Award

...Goes to Peter Clayton, producer/host of Total Picture Radio. It needs no further commentary from me as it eloquently speaks for itself. Good on 'ya Peter.

When "The Citi Never Sleeps" ad campaign was first launched in 1978, Walter Wriston was running the place, and the motto had real meaning. Wriston was highly regarded, as was the institution he lead. Citibank / Citicorp was a cherished brand by its employees and a respected competitor in the financial services industry. Citibank had a unique, authentic, brand identity

Although the current leadership of the company has recycled "The Citi Never Sleeps" slogan, it has completely lost its meaning and aspirational message. The image that comes to mind today of The Citi That Never Sleeps is a demoralized, poorly run behemoth losing billions of dollars chasing subprime riches, cutting thousands of jobs while trying to stay afloat.

In my opinion, the following excerpt from Bloomberg News is a typical move by a company with uninspired leaders disconnected from their employees:Dec. 9 (Bloomberg) -- Citigroup Inc., the bank that's eliminating 52,000 jobs after getting a $45 billion government bailout, canceled its sponsorship of a New York holiday toy-train exhibit visited by more than 125,000 people a year. Dunham Studios, the Pottersville, New York-based operator of the 750-square-foot model railroad, was notified of Citigroup's decision last month, co-owner Clarke Dunham said in an interview. That means the free show that first went on display in 1987 at the Citigroup Center lobby may reach the end of the line on Jan. 2 unless another sponsor steps up or the bank reconsiders, he said. It also means Citigroup will save about $240,000.

"The difficult decision to discontinue this sponsorship was part of Citi's ongoing expense-reduction efforts," Citigroup said in an e-mailed statement. Chief Executive Officer Vikram Pandit, 51, announced on Nov. 21 that he wants to cut costs by about $2 billion per quarter starting next year." (You can read the complete text of Bradley Keoun's reporting here.)

Blah blah blah, Vikram. I've been engaged in a number of interviews focused on the importance of brands. Two recent examples -- John Gerzema, author of The Brand Bubble; and David Henderson, whose book, The Media Savvy Leader was just released.

"So here's an idea I'd like your help with: If we could find 24,000 Citibank employees willing to donate $10 each into a fund to "keep the trains running," it might give the employees of this beleaguered institution something to be proud of, and smile about. I bet through Twitter, LinkedIn, Xing, and Facebook we could mobilize enough Citibankers to take up the cause. Next year, the Holiday Trains at Citigroup Center exhibit could be "In memory of Walter B. Wriston." The fund could be set-up as an old-fashioned "Christmas Savings Account." What do you think 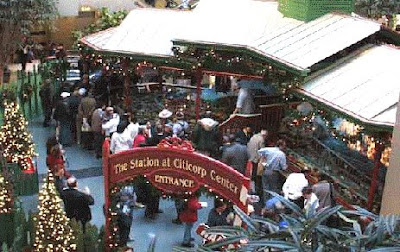 The Holiday Toy Train exhibit is operating this year at Citicorp Center. If you're in the City and have young children, its well worth a visit. Disclosure: From 1984 until 2000 I made a number of marketing, corporate image and employee motivation films for Citi, and produced an internal sales radio show "The Citibanking News Network" for twelve years.

Peter ClaytonProducer/HostTotal Picture Radio
Posted by Dave Opton at 11:25 AM